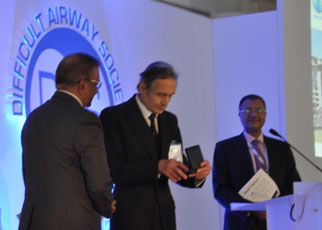 Ronnie Cormack’s came from a crafting family tradition in Orkney, but Ronnie was born in 1930 in Rangoon, Burma where his surgeon father was head of military services. He graduated from Oxford in 1961 and married a staff nurse at St Mary’s, London. He was inspired in science by a biography of Pasteur he read at school and by his tutor at Oxford (also his second cousin), the respiratory physiologist DJC Cunningham (University College). Incidentally, Cunningham also tutored the author of this citation, in the 1980s. With Cunningham he co-authored 4 papers in human respiratory physiology in the 1950s (one is still regularly cited, with >100 citations).

Ronnie was senior lecturer at Bristol but then appointed to the new MRC unit at Northwick Park in 1972 and placed in charge of the obstetric service (working with Lehane who was appointed in 1978 and made honorary consultant in 1980). Little now needs to be said in this citation about the extraordinary success of the famous paper and the grading scale. Its citation score of >1600 makes it one of the most quoted papers in the whole of science, and in fact probably is an underestimate as the scale is so often referred to without a citation. It is quite simply impossible to write any article or paper on any aspect of airway management without quoting the work of Cormack and Lehane.

The MRC gradually withdrew from Northwick Park in the 1980s because of government cutbacks. Lehane moved to Oxford in 1984, and Ronnie took early retirement to focus on his research interests and writing. His other interest is statistics and amongst other things he has published an exact solution for Fisher’s Exact test (the programs for which are being updated in a collaboration with the author of this citation). Thus at over 80 years of age, Ronnie is still very active, researching and publishing.

It is a pleasure for the Difficult Airway Society to confer the Macewen Medal on someone who has contributed so much to anaesthesia and in particular in the area of airway management and improved patient safety.