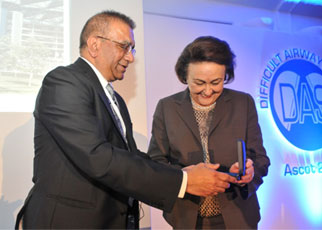 Dr Sybill Storz completed her education in Switzerland specialising in foreign languages. Her father the legendary Dr Karl Storz had started his company in Tuttlingen in 1945; the emphasis being on visionary design, precision craftsmanship and clinical effectiveness.

In the late fifties Sybill Storz joined her father and worked in every department of the instrument company. From the very beginning she gave an equal emphasis to marketing as well as production and technical areas of the business.

She continued to adopt greater responsibilities as the company grew from strength to strength and in the 70’s and 80’s lead the worldwide expansion. After the death of her father in 1996 Sybill Storz took over as the chief executive of the Karl Storz group.

Under her leadership the company registered over 100 new patents and global turnover increased by approximately 15-20% each year since 1996. They also established 27 subsidiaries in Europe, North and South America, Asia, Africa and Australia.

She has always placed a strong emphasis on supporting the requirements of physicians and maintains direct and intensive communications with leading physicians, clinics and scientists with a view to improving medical techniques. It is with this aim that she continues to support the setting up of training centres globally.

The UK is a world leader in airway management workshops designed to provide hands on training. The Karl Storz group in keeping with their company philosophy have enthusiastically supported numerous workshops locally and nationally including those organised by the Difficult Airway Society. Their contribution has allowed workshop leaders to deliver a high quality of training in the field of difficult airway management. Her personal involvement has also ensured that these workshops are conducted successfully in many developing countries by UK faculty.

One of her corporate principles is “The future has a tradition, but tradition also has a future” and genuine progress is rarely spectacular – it is the result of countless individual steps that are subjected to repeated scrutiny.

She is an extraordinary lady whose passion for her work, training and charity has been recognised by numerous prestigious awards in the field of medicine, economics and politics. She has honorary doctorates in medicine and law and the Chevalier de la legion d’honneur to name but a few.

The Difficult Airway Society is delighted to award the Macewen Medal to Dr Sybill Storz for her outstanding personal contribution and continued support to training and research in the field of anaesthesia and airway management.