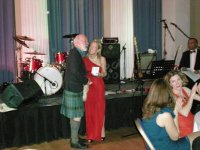 Over five decades of an accomplished medical career, John Henderson has done much for his patients and his profession.

In the 1960s he graduated with commendation from Glasgow University, and chose do two years of House Jobs, including obstetrics and paediatrics. These were the days (and nights) of the "1 in 2", with weekly hours of 120 and more.

In the 1970s he trained in anaesthesia at Glasgow Royal Infirmary, followed by two years in the United States. He was a Fellow at Mount Sinai Hospital in New York, moving to the Brigham Hospital, Harvard. It was here that John began using awake fibreoptic intubation for difficult airway management, using it eight times in 1978, returning to Glasgow to take up his Consultant Post. Over the years he held interests in cardiothoracic and neuroanaesthesia, vascular and regional anaesthesia as well as in cancer pain management, but throughout this was his abiding interest in airway management.

In the 1980s he steadily developed airway techniques and was a great influence for generations of trainees.

In the 1990s he consolidated his thinking on direct laryngoscopy, concluding that the Macintosh technique was at best limited and straight blade techniques were usually superior, especially in the "difficult" cases. He published widely on this, including a major paper on the "Paraglossal straight blade technique" in Anaesthesia. He developed an improved version of the archetypal (Miller) straight blade, called (appropriately) the Henderson blade. He also realised that newer laryngoscopic methods showed early promise. He was an "early adopter"- now videoscopes of all styles are common now, but not then. John organised one of the first major airway meetings in Glasgow in 1998. This included an airway workshop- common place now, but innovative then.

John was a founder member for DAS and soon joined SAM.

For the new millennium, John's contributions increased at national and international level. He was Secretary to DAS, leading the team for the DAS Meeting in Glasgow 2003, consolidating the workshop component into an integral part of the Meeting.

He was the first author for the DAS guidelines on unanticipated difficult tracheal intubation. This major work took four years of hard work between inception and publication. At the core of this are the proactive strategies of preparation and planning coupled to the reactive tactics of contingency. The mantra of "Plan A, B, C, D" is common use now.

John was an enthusiastic and supportive teacher of trainees and colleagues. Many have learned much from him at various levels, be it from his encyclopaedic knowledge of tools and techniques, skills in application and steadfast committee work at all levels. His cheerful approach too. Who can forget John striding into Euroanaesthesia in Lisbon wearing kilt, carrying his big red Berghaus rucksack?

John has taught widely, with South America and Antarctica yet to welcome him.

He has published widely too. When the Editors for the new (seventh) edition of "Miller's Anesthesia" were looking for the international expert to write the chapter on airway management, who did they call? John Henderson.