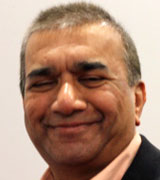 Citation for Dr Jairaj Rangasami
Dr Rangasami was born on 26th May 1953 in Kharagpur, West Bengal, India. He studied medicine at SCB Medical College, Cuttack and graduated 1979.
As a student Jairaj was a keen cyclist and national level table tennis player. In the 1970’s Jairaj fulfilled a childhood dream by completing a 500 mile journey from Rourkela to Calcutta in only 6 days with a close friend, all the more remarkable as in those days only fixed gear bicycles were available and they could only travel during the day, as it was too dangerous to cycle after dark! Jairaj was also the table tennis champion three years running at his medical college and represented his college in national competitions.
Since Graduation, Jairaj has worked in five countries (India, Kenya, Saudi Arabia, Austria, Ireland) and learned to speak 9 languages fluently,before finally settling down in the UK. Here he completed his training in the Oxford School of Anaesthesia, under the guidance of Professor Mansukh Popat, Dr Colin Blogg and the Late Dr ChandyVergheseand was appointed as a Consultant in Anaesthesia & Intensive Care Medicine at Wexham Park Hospital on 1st July2000. With his vast experience and knowledge of airway management, Jairaj is probably one of only a handful of anaesthetists that can claim proficiency in managing an airway with either a Schimmelbusch mask technique or an awake fibreoptic technique!
At Wexham Park Hospital, Jairaj’s interest and commitment to teaching airway management led him to develop a very successful airway training programme and conducted the first advanced training module in airway management at a DGH under the Oxford School of Anaesthesia. He also established the very successful Wexham Park Advanced Airway Workshop and recently ran the 18thiteration of this course. Jairaj also runs international airway workshops held regularly in Hungary, Estonia, Kenya and Uganda.
In 2006 Jairaj became a DAS organising committee member, he established and led the DAS Website team for eight years. In total Jairaj has been an active DAS committee member for an unparalleled ten years. During this time he contributed to many DAS projects including, most notably,to three chapters in the NAP4 study and actively participated in the NAP4 review panel and managed the secure online data management process.
In 2013, Jairaj co-chaired the organising committee for the very successful 18th DAS Annual Scientific Meeting held at Ascot. Also in 2013, Jairaj reached the pinnacle of airway management in the UK by becoming the first elected President of our society. During his presidency Jairaj established the electronic voting system, saw the DAS membership grow from 2000 to over 3000 members and oversaw the launch of the 2015 DAS intubation guidelines.After successfully completing one term, Jairaj handed over the Presidency to Dr Anil Patel at WAMM Dublin in 2015.
Since handing over the Presidency, Jairaj has been spending more time with his wife Jayanti, daughter and two grand-daughters, who he says all keep him very busy! Despite this he continues to be involved in DAS projects and is one of the co-authors of the DAS ITU intubation guidelines, which will be launched in November 2017.
Dr Rangasami has contributed to the airway training of a generation of anaesthetists and has been an integral party of our society for over a decade, I am honoured to have written this citation and DAS is delighted to present Dr Rangasami with the coveted Macewen Medal for his outstanding contribution to the society and airway management. Congratulations Jairaj.
Dr Imran Ahmad
DAS committee Member
Attachment
2017 DAS Medal - Dr Jairaj Rangasami
Category:
DAS Medal