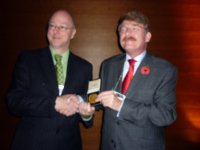 I would like to recall the beginning of the Difficult Airway Society. The year was 1995. I was a Senior Registrar in Anaesthetics, having just returned from working in the United States. One of the things that frustrated me about the UK compared to America was the reluctance to use the Fibreoptic Laryngoscope to manage patients with difficult airways. Comments such as "all you need is a strong left arm" were dispiriting for me.

One day I saw a poster advertising a Difficult Airway Meeting in Guy's Hospital in London. I quickly signed up for this and eagerly awaited the meeting in December. There were about one hundred delegates, and the meeting was introduced by a lively and enthusiastic Anaesthetist called Dr Adrian Pearce, who I had never heard of. He lamented the lack of training in difficult airway management and in particular the lack of use of the Fibreoptic Laryngoscope - in fact he brought along a pile of the standard Anaesthetic textbooks of the day, picked them up one by one, demonstrating the lack of information about the difficult airway. By the time he had been through the books he said he felt like crying.... He had big plans to change all that with the new Difficult Airway Society, with Regular Meetings to provide a forum for discussion and education in the management of patients with airway problems. It was an inspirational beginning and I felt at the time that this was the start of something great- and I was right. Personally I have run over forty Fibreoptic Workshops for trainees in my own small DGH. It is the influence of the Difficult Airway Society as well as enthusiastic trainees that has inspired me to do this.

Times have changed since then. The Difficult Airway Society has grown and thrived. It has earned the respect of the Anaesthetic World. In 2004 we saw our guidelines for the management of the Difficult Airway published, and subsequently reproduced in the standard Anaesthetic textbooks. Adrian Pearce has been a vital lynchpin throughout the Life of the Society, and we owe a great debt to him. For this reason I would like to nominate Adrian Pearce for the DAS medal.