Each step of the guideline is described.

This case scenario is of an adult, non-pregnant patient undergoing a rapid sequence induction. This is a common anaesthetic technique in the UK when there is a risk of gastro-oesophageal reflux.

The anaesthetic technique includes optimal preoxygenation, the use of an induction agent and suxamethonium, with the application of 30 N cricoid force at the onset of unconsciousness.

Preoperative airway evaluation has not predicted any problem with airway management. Airway evaluation is imperfect and so airway strategy must deal with unexpected difficult direct laryngoscopy and difficult facemask ventilation.

In this case scenario, the urgency of the surgery is not immediate and failure of intubation activates a plan of 'wake-up'

The scenario of a rapid sequence induction when surgery is immediately urgent (for example in extremis aortic aneurysm rupture) is not considered here in detail. (Please note that the quality of guideline image is low to aid fast loading. The pdf file download is good quality.)

Notes: There is no intubation Plan B because the patient is going to be woken up without any other attempts at intubation. The only task now is to move to Plan C - the maintenance of oxygenation whilst the induction agent and muscle relaxation wear off and the patient awakens. 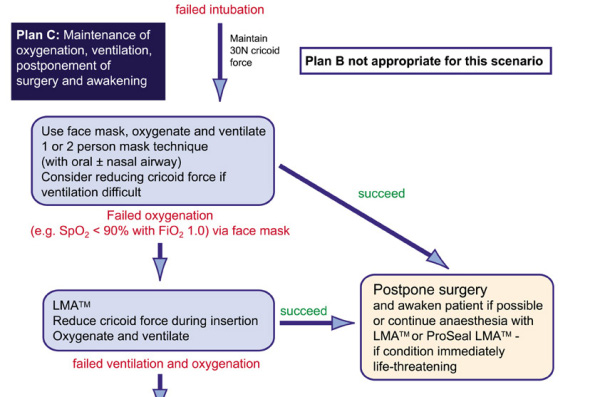 Notes: This is considered in another flow-chart.

Areas for Discussion in 2006